Twin Anime Characters: Here Are The Best Anime Twins of All Time!

Make sure to scroll down this list to see all of these amazing anime twins, whether they are female or male characters. Some of them have adorable personalities, while others have creepy tendencies that are hard to hide. Regardless, twins are made up of two people who have a lot of similarities and frankly, it is kind of hard to tell them apart! Today’s list is about the best twin anime characters in history.

So, in honor of the special bond that twins share, here are some of the best anime characters with twins. 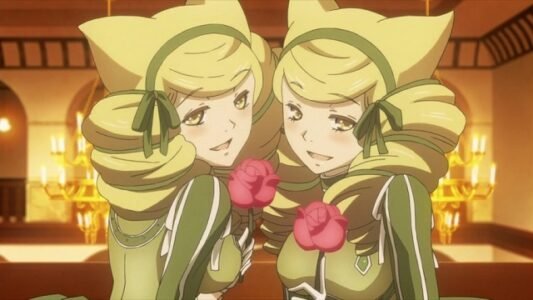 The twin girls Bonbori and Hozuki, who are portrayed as one of the seven main characters in the manga and anime Otome Ykai Zakuro, are the first on the list of the best twin anime characters.

Throughout the course of the series, Ganryu is frequently accompanied by the Ministry of Spirit Affairs twin sisters, who are never apart from him.

23. Nana and Momo from To LOVE-Ru Darkness 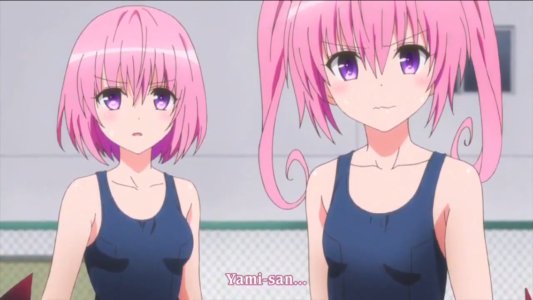 Next, we have Nana and Momo, the main female protagonists of the To Love-Ru Darkness manga and anime series. Although they don’t seem as attached as they used to be as the series progresses, they still spend time together.

Because Nana hangs out with Kurosaki Mea, and her sister Momo developed a crush on Rito, whom she now sees more often and has been trying to expand her “Harem Plan” plan for him.

22. Hikaru and Hibiki from Sekerei 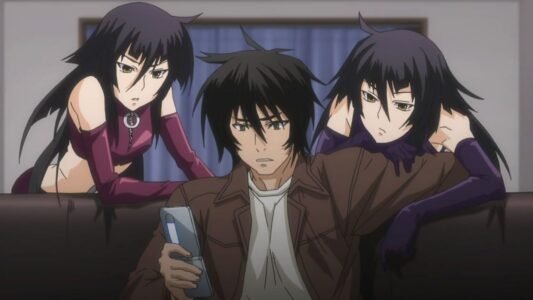 In the first and second stages, the anime twins Hibiki and Hikari, both of whom possess the power of electricity, attempt to fight unwinged Sekirei together.

Even though these twin sisters are the underdogs, Homura reveals that they are still more skilled fighters than he is. 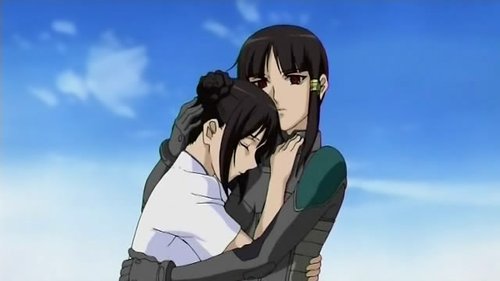 Yu Fan Xia and Yu Lan Xia from the Full Metal Panic! The Second Raid anime and manga are the next best twin characters in anime.

Xia Yu Fan and her twin sister Xia Yu Lan are working with Gates because they have been at odds with Amalgam since at least the Second Chinese Civil War, when they destroyed their hometown in China.

Mariya’s mole is under her left eye, and Shizu’s mole is under her right eye. Mariya and Shizu decided to compete in a competition in which they would swap places at their respective all-female and all-male schools. The only way to tell the two beautiful twins apart is to look at their moles under their eyes.

When Mariya is so liked and respected by her peers, who knows who won the bet? The main character Kanako and her maid are the only ones who know that Mariya isn’t very attractive and is a sadistic man. 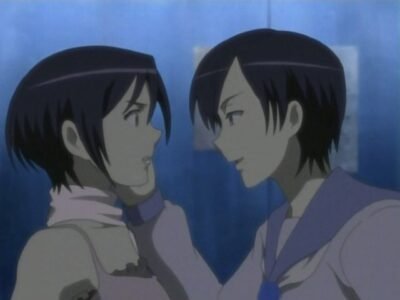 In the anime and manga series “Blood+,” Saya Otonashi is the main character. She is the older twin sister of Diva and Hagi’s lover. She is the firstborn of the daughter of a Chiropteran mummy, a pureblood Chiropteran.

These anime twins have cool powers. They don’t look like each other, but when Diva becomes a chiropractor, her eyes glow blue, her pupils look like slits, her nails turn into long, sharp fangs, and her lips get darker too. She looks just like Saya!

18. Tsukasa and Kagami Hiiragi from Lucky☆Star 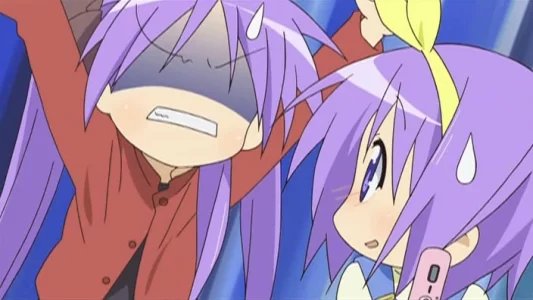 Tsukasa and Kagami are among the cutest twin anime sisters of all time. They live with their parents in a six-member family. Tsukasa is not good at sports or studying, but she excels at cooking. Kagami, on the other hand, has excellent grades and studies very hard. In her first year, she even held the position of class president.

Tsukasa is portrayed as a typical clumsy, sleepy character who sleeps a lot. Kagami, on the other hand, loves to read light novels and sometimes feels lonely because no one in her life shares her interests.

17. Linze and Elze Silhoueska From In Another World With My Smartphone 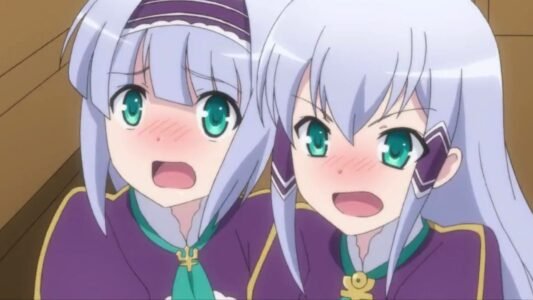 One of Touya Mochizuki’s wives is the anime twin sisters Linze and Elze Silhoueska from the show “In Another World With My Smartphone.”

They were saved from being conned by him in this isekai series. Linze and Elze Silhoueska are the younger Silhoueska twins; they currently reside at Brunhild Dukedom with everyone else.

With their waist-length silver hair and green eyes, Elze and Linze are among the most beautiful teenage anime girls. They are also so powerful that you can rely on them in a pinch. 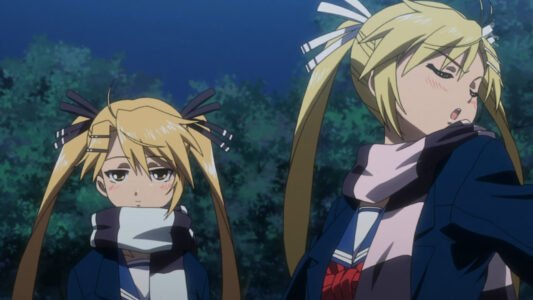 Kotone, the older of the two characters in the anime, has sadistic tendencies, but she is still sweet, delusional, and compulsive. The twins Akari and Kotoni are among the most attractive anime girls that have ever existed.

Due to his misfortunes, Kotone has a crush on Junpei, and if he is with anyone else, she becomes jealous. On the other hand, Akari is initially confrontational but has since come to like him.

When Akari tells Junpei that she can see spirits and knows he is cursed, she demonstrates her ability to sense supernatural activity. She and her sister Kotone are the only people who know about Junpei’s curse.

15. Ren and Ran Tachibana from Free! 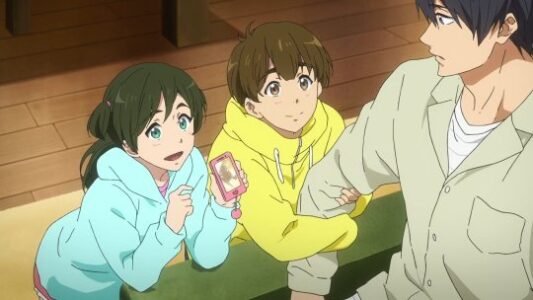 Ren is a guy who lives with Ran and Makoto, enjoys Makoto’s company, and takes Makoto as a male influence. It appears that Ran believes Ren is always late for everything. On the other hand, Ran has a small figure, teal-colored eyes, and olive-green hair tied in two pigtails. 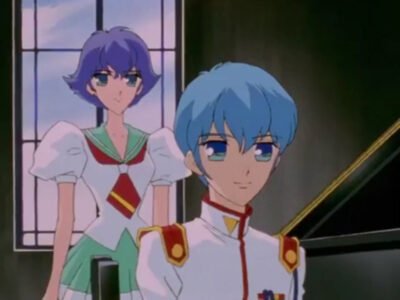 Kozue is a talented pianist, but the two of them shined together in the anime series Revolutionary Girl Utena. She used to really enjoy playing the piano with her twin brother Miki Kaoru, and the two of them were very close.

Their parents wanted them to be successful in their music careers, so they planned a tour for the twins before Miki got sick. Because Miki couldn’t perform, Kozue had to go on by himself.

13. Yuuko and Hideyoshi Kinoshita from Baka to Test to Shoukanjuu 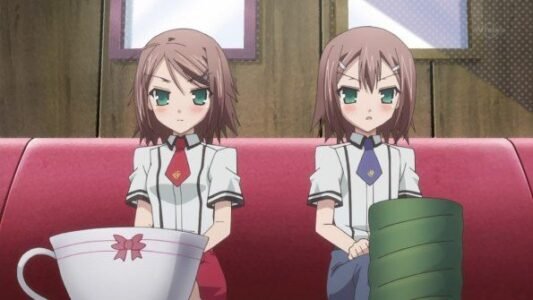 Hideyoshi Kinoshita is a second-year student at Fumizuki Academy. He has been a classmate of Akihisa since first grade, and he also has a fraternal twin sister named Yuuko who attends their school, Fumizuki Academy. Hideyoshi is also a member of the school’s drama club.

Even though Yuuko has a higher academic level than Hideyoshi, she is also very proud, arrogant, and prone to being irritated, in contrast to Hideyoshi, who is always calm.

12. Kaguya and Yuzuru Yamai From Date A Live 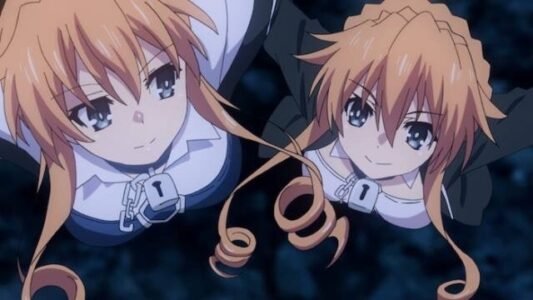 Kaguya and Yuzuru Yamai, a pair of spirits named Yamai who were initially just one spirit, are among the cutest anime twin characters on our list. They are frequently regarded as the main heroines from the Date A Live franchise.

Although Kaguya and Yuzuru are identical twins with identical eyes, hair, and height, they still possess distinct traits and personalities.

11. Shalsha and Falfa from I’ve Been Killing Slimes 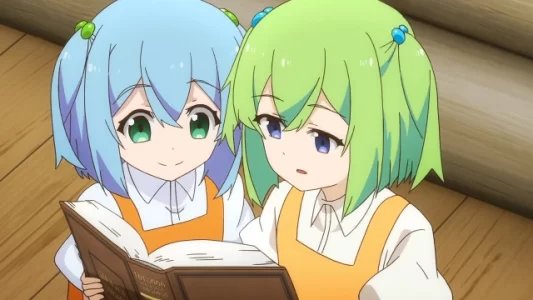 Falfa and Shalsha are among the best twins in anime. They are the main characters in the I’ve been killing slimes for 300 years Kuku series, and they have a lot in common with one another.

Shalsha has bright blue or violet eyes and light-green hair that is tied into two tails with a light blue band, whereas Falfa is a happier and cuter girl.

Due to Shalsha’s much more reserved and introverted personality than Falfa’s, she prefers not to interact with new people and only speaks when absolutely necessary.

10. Chiho and Chizi Mihara from Kobato 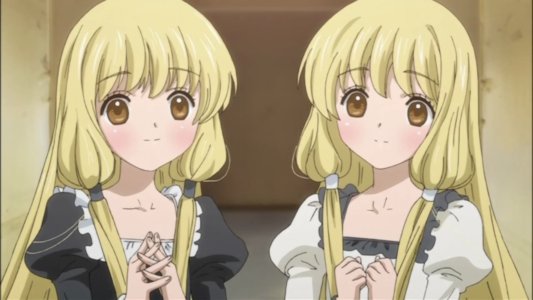 Chiho and Chise Mihara must be one of those adorable anime twin sisters because they are the daughters of Chitose Mihara in the series. They are almost too cute.

They both have brown eyes and blond hair that reaches their knees, just like you’d expect from a blonde!

In terms of their personalities, Chizi and Chiho Mihara are both very pleasant and upbeat, and they share a love of animals. 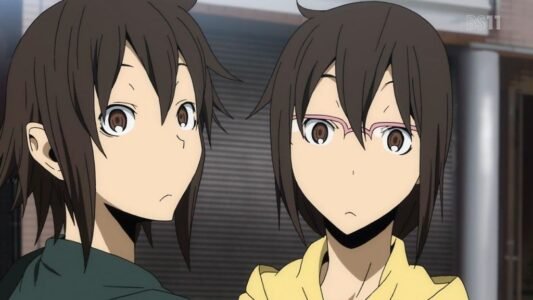 It’s sad that these two anime twin sisters only appeared in one episode because they have such a strong bond and share the same obsessions with an actor named Yuuhei Heiwajima.

They have never been apart; they have always been close, and it would appear that Izaya has strengthened their relationship.

8. Misaki Twins from Another 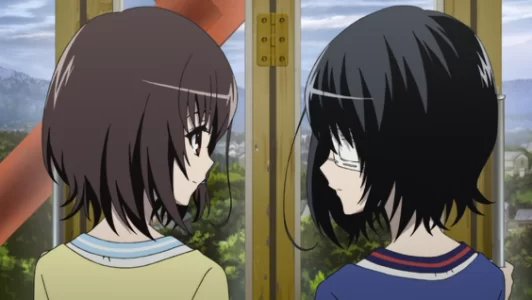 Even though these anime twin characters are acting and dressing alike on purpose, they give the impression of being identical.

Mei and Fujioka used to meet in secret at first, but after some time, they got back together and started sharing a lot of things, and they got together because they both loved dolls.

7. The Sonozaki Twins from Higurashi no naku koro ni 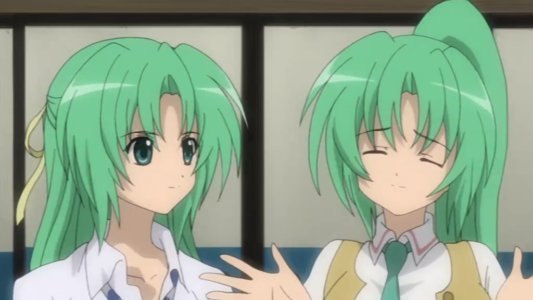 Despite the fact that the entire plot focused on these anime twins later on, the twins are confusing. The sisters used to live in different places, met again after a long time apart, and they started talking to each other again. 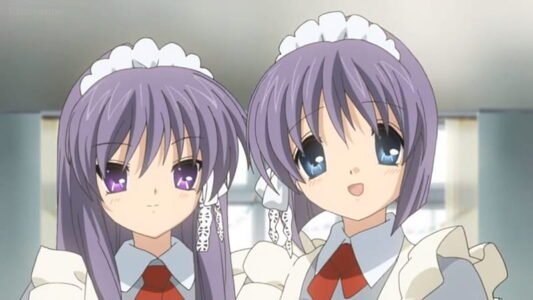 We also have the adorable twin anime characters Kyou and Ryou Fujibauashi from the popular anime series Clannad. While Kyou is the tsundere kind lady with long hair who frequently protects her sister, Ryou, on the other hand, is calm and caring. They are two completely different ladies who only get along well as siblings. 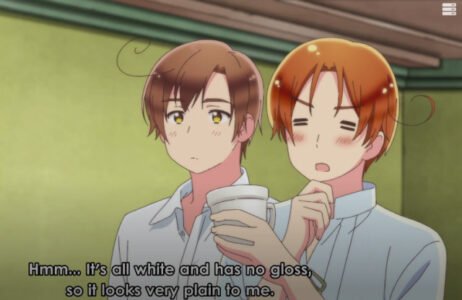 Italy is known for being mellow, friendly, tough, and aggressive, but she also has a nice side to show, and Romano is a little grumpy with a not-so-attractive side like his brother in the anime series Hetalia.

Romano is the one who bullies and does not tolerate his brother, and he does not really care what he does to him. As a result, these twin anime brothers do not get along well together. 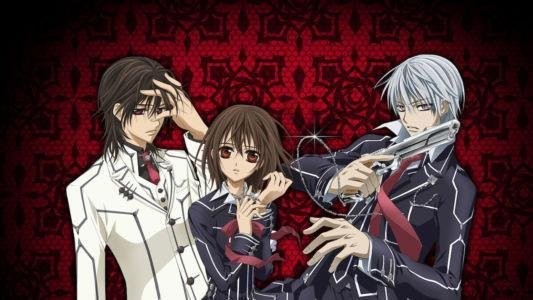 Ichiru and Zero are male anime twins with a cursed past. They come from a vampire family and should have been one person; Ichiru should have killed his brother when he was still a baby.

Zero also hates his twin, but he still has love for his brother. They had a great relationship when they were younger, but now they hate each other. Ichiru was jealous and hated his brother so much that he caused a lot of trouble for the whole family. Zero hates his twin as well. 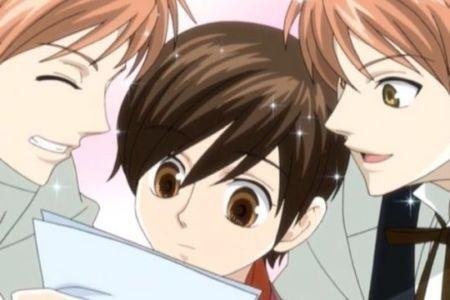 The twin anime characters known as the Hitachiin brothers are popular among fans of The Ouran High School Host Club because they are depicted as mischievous and devious young men who occasionally play with other people, including their classmates.

You will see these twins together in this anime, which also features their hilarious and ridiculous scenes because they are nearly indistinguishable and really need each other to experience everything. 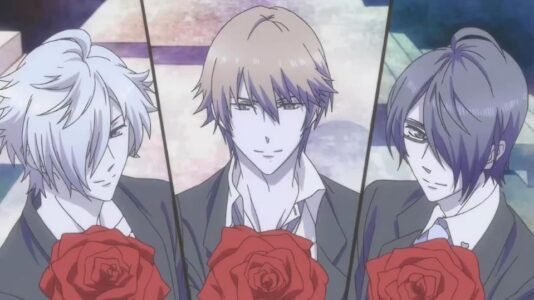 Although Azusa and Tsubaki are more identical, he is also a voice actor. However, he is calmer, less tenacious, and frequently the one who keeps the peace in the family. Although they are not twin anime characters, they are triplets who are not very similar.

They all have spots on their faces, but only one of them has purple eyes, and they still talk to their brother frequently. 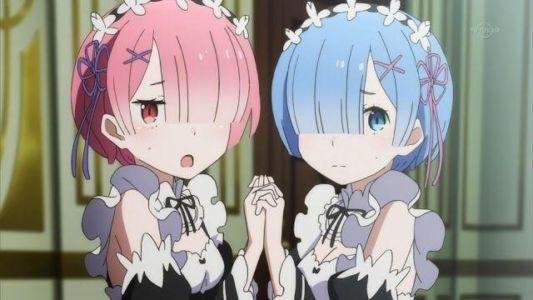 Rem and Ram are the most popular anime twins ever. Despite being very close to one another, these anime twin sisters have their own challenges, such as being different from one another in some ways.

Rem can appear polite but will do whatever it takes to help the situation, despite Ram’s self-centered nature and slow decision-making.

Even though Rem is slightly stronger than Ram, these pretty sisters are strong when they fight, but when they are enraged, no one hesitates to fight them.